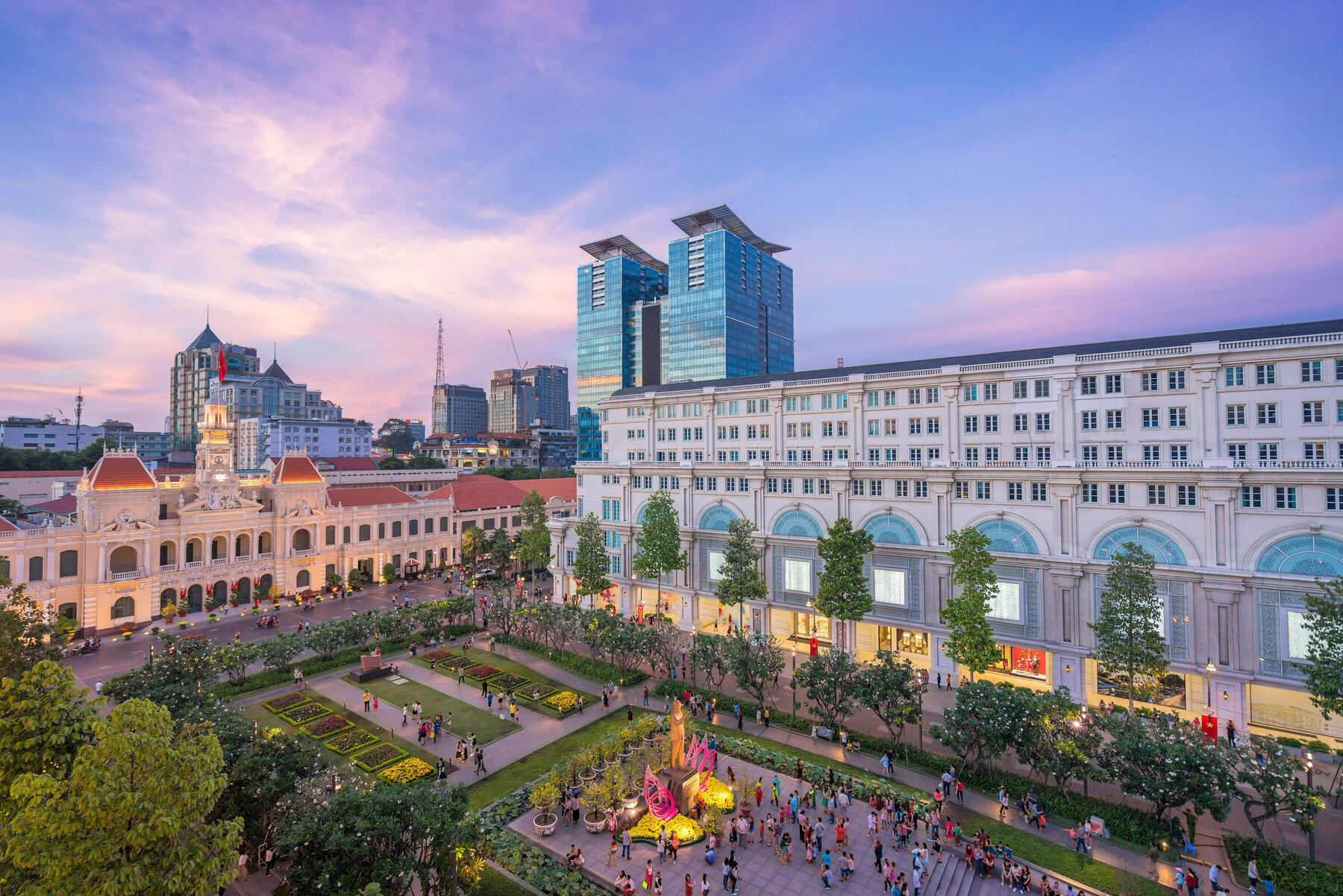 Ho Chi Minh City (commonly known as Saigon) is lively in every moment, day and night, memory and present, local lifestyle and architectural landscape. The 10 places to visit that we recommend will be attractive places in the city. You should visit to learn about the culture, history and life of the local people. 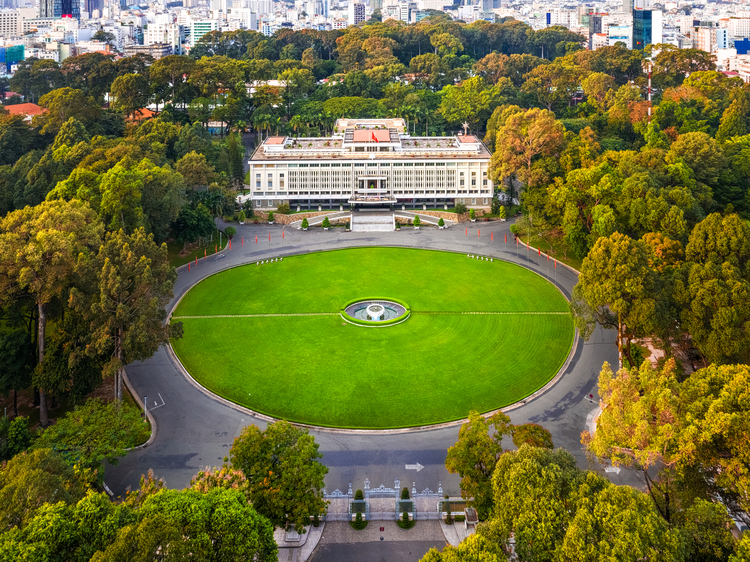 The work was built on the foundation of Norodom Palace, according to the design of architect Ngo Viet Thu. This is the place which marks the glorious historical victory of the nation on April 30, 1975, ranked as a special National Historical-Cultural relic. In 1976, the Independence Palace was called Reunification Hall. Today, when visiting, visitors can order a narrator or an audio guide to learn more about the history and special events here. Visitors should visit the area displaying information and documents about Norodom Palace (1868) first, then visit the information room about the main building of the Independence Palace (1966) to make the journey more complete and interesting. Inside the palace, there are souvenir shops, restaurants and cafes to serve visitors. 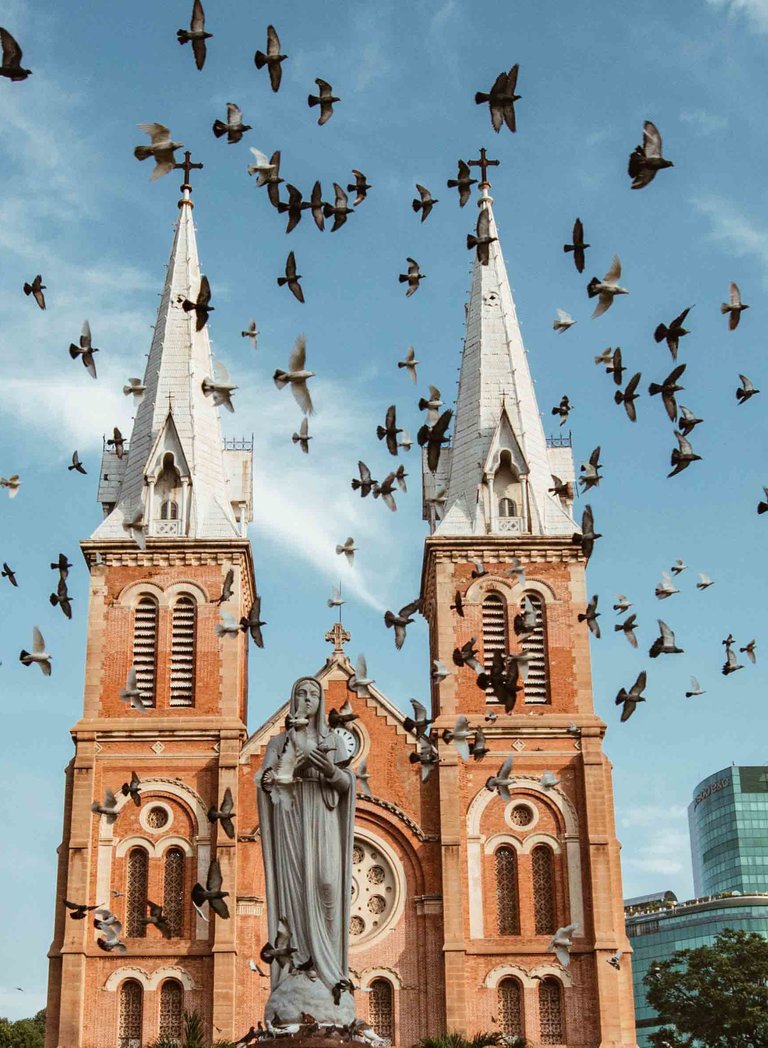 Notre-Dame Basilica was built according to the design of architects Bourard and Bishop Colombert. It was inaugurated in 1880. The outside of the church was built with bricks made in Marseille (France) without plastering, still maintaining bright pink color, no moss dust to this day. This place is considered as a peaceful oasis in the busy city center.

Tips: “The statue of Our Lady of Peace in front of the church is made of Italian Carrara white marble and carved in Pietrasanta about 500 km from Rome”. 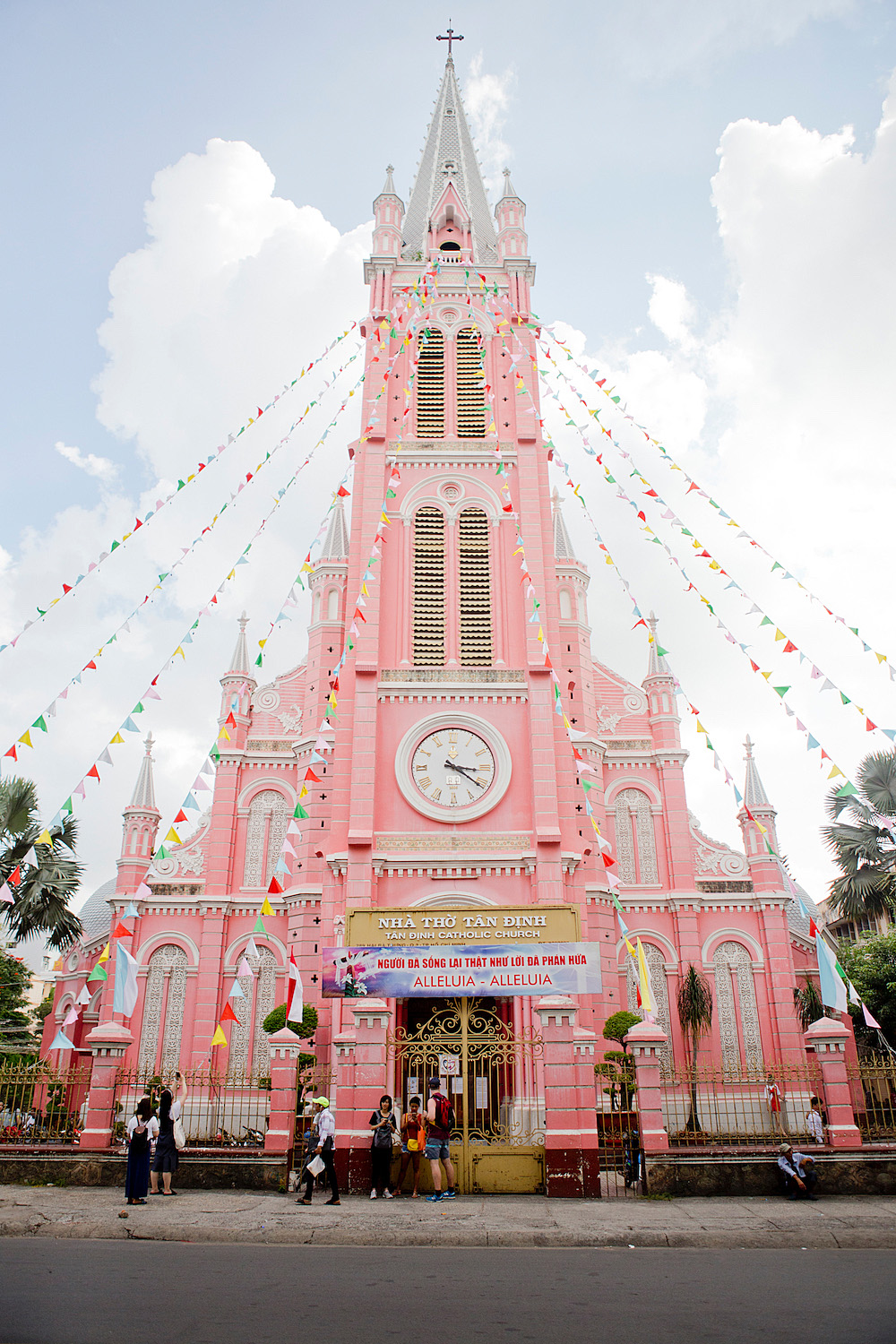 Sacred Heart Church, located on Hai Ba Trung Street, was built in 1876 in the Gothic and Roman style, mixed with a bit of Baroque. The bright pink color on the outside alternating with white and blue decorative lines makes the whole work more sparkling under light blue sky. The church attracts many visitors to take photos and check-in because of its unique beauty in the city center.

Tips: “The altars in the cathedral were crafted from precious stones and shipped from Italy”.

The temple was built by an Chinese overseas named Ly Thuy Long who contributed money to build in 1744 and became the ancestral home of the Lam Te sect, Vietnamese Buddhism. Structures and Buddha statues layout style based on the ancient pagoda of South Vietnam. The system of envelopes and diaphragms are delicately carved, elaborately conveying the wishes of an elegant, happy and harmonious life through the images of apricot flowers, bamboo branches, cranes, custards, etc. Besides that, the pagoda still holds many sets of gold lacquer and precious wood statues such as the Eighteen Arhats, Tam The Buddha, Amitabha Tam Ton and ancient books, inscriptions of Buddhist scriptures. Entering the lunar month of July every year, Giac Lam Pagoda organizes a very solemn Vu Lan Ceremony to welcome local people and tourists to visit and pray for peace.

Tips: "This is the oldest temple in Saigon, still preserving the jewel of Buddha's relics and Bodhi tree before Venerable Narada brought it from Sri-Lanka to Vietnam."

Central Post Office is one of the architectural works built in Ho Chi Minh City at the end of the 19th century in the European classical architectural style by 2 French architects Alfred Foulhoux and Henri Auguste Vildieu. Inside the post office resembles the Orsay station in Paris and this post office was built by Eiffel's materials (France) transferred to Vietnam. Along the two sides of the corridor, many archival items, photos of the country and people of Vietnam are sold as souvenirs. This is an ideal place to rest after walking around the city center. Sitting on the old wooden benches while looking at and taking pictures of old letters and old phone booths is an unforgettable experience.

Tips: "Don't forget to look at the 2 oil-painted maps of Saigon and its vicinity in 1892 South in the new construction period 1936 at the main gate"

“Built in 1936, the Central Post Office is an iconic building that has great significance in terms of architecture - culture - history to the people of the city. This is also one of the must-visit tourist attractions when visiting the largest city in the South.”

The theater is designed by architect Eugène Feret in the Baroque architectural style. This is the only company covered by Ardoise thatched roofs and has the most costly construction cost in Saigon during the French colonial period. At night, the theater is sparkling lit under the artistic lights of the Lion Group (France) designed in 1999. If you want to visit the inside of the theater, you can buy tickets to see the art shows at the counter or the website. After finishing the show, visitors can go around the theater to take pictures and admire the architecture here.

Tips: “The theater facade is clearly influenced by the art of the Petit Palais theater built the same year in Paris.” 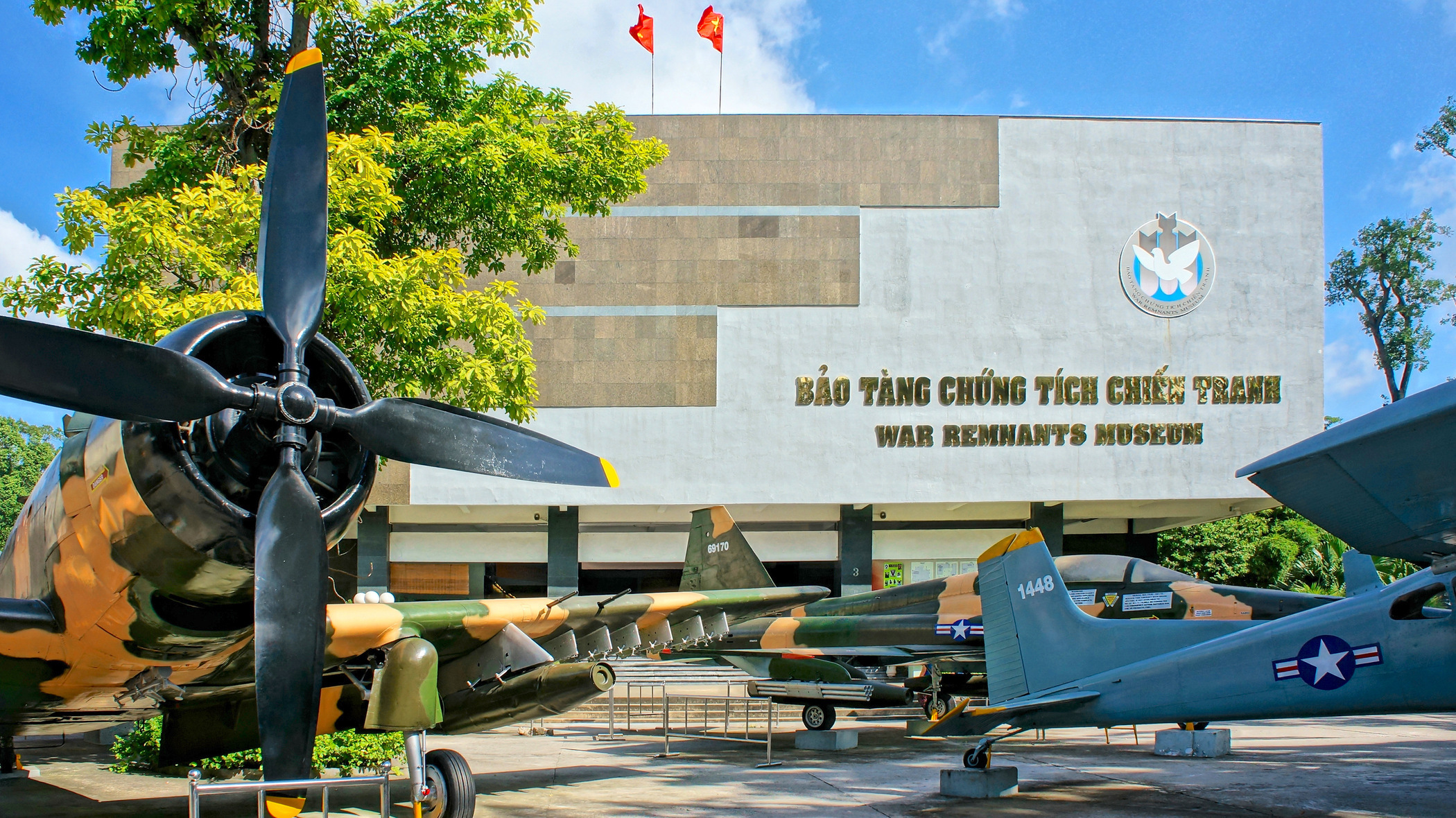 The 3-storey museum holds more than 20,000 precious documents, artifacts, about the Vietnam wars. The space at the museum is a great place for history buffs who want to reminisce about the days of fierce war. The museum became a member of the UNESCO System of Museums for World Peace (INMP) in 1998 and a member of the ICOM World Council of Museums in 2007. At the end of 2018, TripAdvisor honored the Museum of Remnants War on the list of 10 best museums in the world. Visiting the museum will leave a feeling of recovery and a lasting impression in the hearts of visitors about the unyielding will and indomitable spirit of the Vietnamese people in the history of building and defending the Fatherland.

"Don't forget to look and reflect on the photo of Napalm Baby, taken in 1972 by former Vietnamese photojournalist Nick Ut, which won the prestigious Pulitzer Prize" 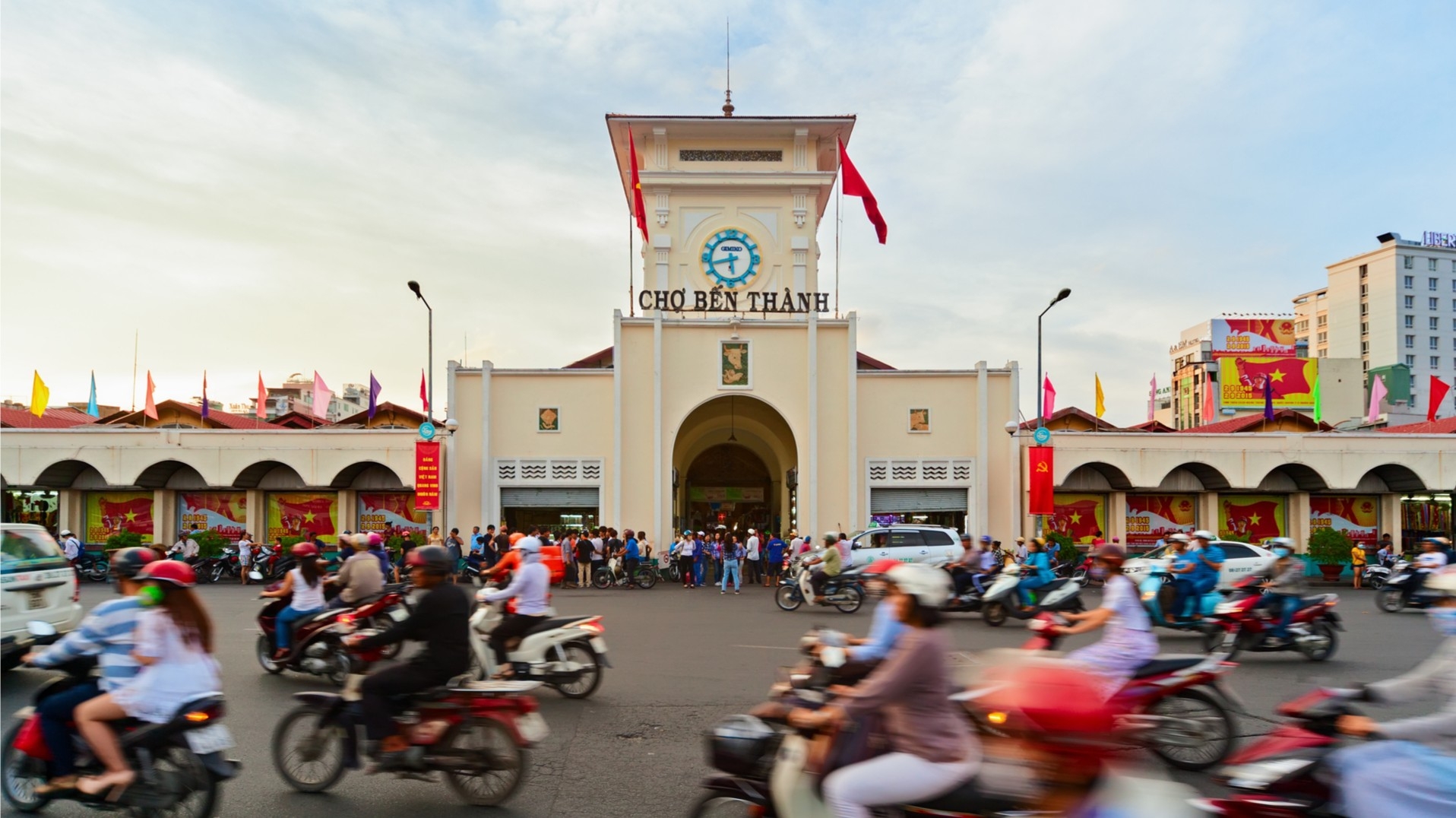 Located in the city center, this is a traditional market that was established in 1914. The market is designed with four main doors. The South Gate area has a three-sided clock tower overlooking the Quach Thi Trang square, this is also a place to sell fabrics and dry food. The North Gate area is colorful with fresh flower and fruit stalls. The rest, the East gate area gathers stalls selling cosmetics, confectionery and the West gate area sells footwear, handicrafts and souvenirs. Ben Thanh Market is not only an attraction for tourists to visit and shop but also considered by many to be a symbol of Saigon in the last century.

“The name of the market originates from its location on the banks of the Ben Nghe River, next to a river wharf near Qui citadel, so it is called Ben Thanh market.”

Nguyen Hue pedestrian street is one of the most beautiful and modern squares in Vietnam. With a length of more than 600 meters, stretching from Ho Chi Minh City People's Committee and ending at Bach Dang Wharf, this place is a space for walking and playing for locals and visitors to the city. At night, especially on occasions of cultural festivals and art shows such as Ao Dai Festival, Nguyen Hue flower street, Countdown Party, etc., the street is always more crowded and bustling than ever. On both sides of the street are high-class buildings, modern commercial centers, high-class hotels and luxury restaurants and shops.

“Nguyen Hue pedestrian street has more than 200 years of history. To this day it is still the most beautiful and modern street of Saigon – the magnificent Ho Chi Minh City.”

Cu Chi Tunnels is located in the northwest of the city, preserved in 2 locations: Ben Duoc Tunnels and Ben Dinh Tunnels. With a network of more than 200km underground tunnels, the tunnels have clinics, rooms, kitchens and storage. This place keeps the resounding historical mark of the soldiers of Ho Chi Minh City. When coming here, visitors can participate in experiential activities such as tunneling, paintball shooting, sightseeing bicycles to fully experience the life of Saigon people in the 40s and 50s.

Tips: "The people in the tunnels used US military soap to put in the hatch and ventilation doors so that the sniffer dogs couldn't detect it."